How to play Roulette?

Roulette is one of the games which is easy to learn and quite simple to play. This attracts a lot of players to try their luck and a single lucky strike will reap huge amounts of winnings. This is the only factor that makes the roulette wheel so attractive.

How to play roulette? As discussed, roulette table consists of a wheel on an elongated table. The wheel on the table as slots numbered from 1 to 36. Each of this slot is assigned a color and they are arranged in such a way that each of this slot is alternated by red and black color.

There are two types of roulette tables which are European and American. The difference between the two tables is that the European roulette table has a single green “0” slot and the American roulette table has two green slots. Numbered “0” and “00”.  This is one end of the table. The other end of the table has rows and columns in which the numbers are arranged. There are twelve rows and 3 columns. And again these numbers are arranged in red and green colors which are same as the ones on the wheel. On the start of the three columns you have the “0” or the two “0” and “00” depending upon which roulette table you have. These rectangular boxes are used for inside bets and the boxes outside these numbered boxes are used for outside bets. 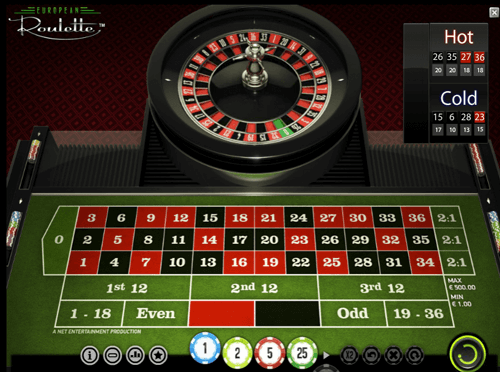 How to play Roulette

Roulette in French means little wheel. Hence a roulette wheel includes a rotating disk which has compartments along its edge and this rotates around the base of a large bowl. The game starts with the ball being spun around the circumference and it keeps moving continuously till the wheel stops moving and the ball eventually stops in one of the depressions of the wheel. The player needs to first place a bet on a single number or can choose to bet on a series of number before the game begins and the croupier starts spinning the ball. This is the most essential part of the game where the bet needs to be placed much in advance before the game actually begins. The bets are placed by the player based upon the two colors which are red and black or if the number on the wheel is an even number of odd number. To place a bet, the player needs to lay down chips on the betting mat. Then the wheel of the table is rotated in one direction while the ball is spun in another direction and left on the wheel. For a while the balls keep spinning around the wheel’s edge finally stopping its spin and coming to a halt when it loses its speed. The ball settles in any of the colored or numbered divisions of the wheel. The color or number where the ball has stopped is declared as the winning number or color. The Croupier is in charge of the game and he is responsible for spinning of the wheel and supervision of the game and manages the pay of the winners. Each chip has its monetary value printed on it. Different denominations of chips are made in different colors to distinguish between the currency. At the start of the game, each player needs to purchase chips of different colors. When the game comes to an end, the winner’s chips are calculated in monetary terms and he is provided with cash chips for the same amount. He can reimburse the cash chips for an equivalent amount of money at the cash table of the casino.

Roulette was first invented in the 18th century in France. Over the years the game has evolved and the game played today is a revised version of the olden board game of roulette. This game gained huge popularity in the 1800’s and spread all over to the American and European countries. In course of time it became the most famous and most played game in almost all casinos. Players who wish to play this game can choose a variety of betting alternatives. You can either choose an inside bet or an outside bet.  Inside bet means picking an accurate number of the wheel where there is a higher probability of the ball landing and stopping thereby making the player a winner. An outside bet is one where a player would have to place bets on larger sections of pockets in the wheel. Winning the game is based purely on probability and there is no sure way or technique of winning this game.  In this game generally there is a minimum bet and maximum bet that a player has to invest.  Players can play the game for as long as the croupier keeps spinning the ball in the wheel. When he announces that bets can no longer be placed then the game comes to an end.  When a person wins a game, the croupier keeps a marker called as dolly on the winning number of the wheel. As long as the dolly is placed on the wheel, the other players cannot place new bets or remove any bets or claim any bet from the table. The croupier sweeps away all the other losing stakes with a rake. He assesses how much each player has won and decodes how much amount each player is due to get. Once each player has received due payment then the croupier takes away the dolly off the table and a new game can start thereby.

The game of roulette can be mastered only by practice and as a player keeps playing he gets an idea of the technicalities and thus gains experience in playing this game and gets an idea of how to win it. A person who is new to this game usually has minimal or no experience in playing this game and hence loses much of his money while those who are experienced stand a higher chance of winning this game. There are a few things which a player needs to keep in mind while playing the roulette game. The player should first enquire what is the maximum limit which can be placed on each bet. It is advisable to avoid placing a bet comprising of five numbers. It is better to choose and play a game which has the surrender rule in it. A person should aim at winning maximum amount of money with as less spins as possible. A person who is new to this game is always confused as to which roulette to choose between to play. Whether to opt for a zero roulette or a double zero roulette. But he should remember that there is much more advantage in playing zero roulette. It is advisable to place small bets for spinning so as to increase the chances of winning the game.

These are tips, tricks and strategies that will help you continue playing roulette (you can check more tips at exceptionalcasinos.com). But be aware that this is a game of luck and many online roulette wheels are just computerized slot machines that pick the number randomly and there is a fair chance that these are rigged.